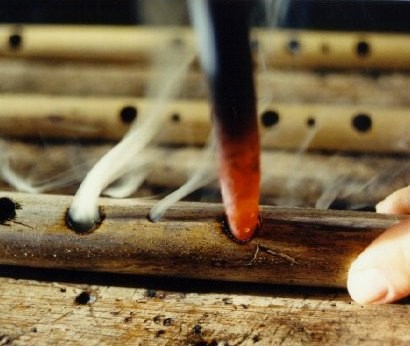 My secret and my moans are not that far apart
However the eye and ear have no such light
v. 7
سِرِّ من از نالۀ من دور نیست     لیکْ چشمُ وُ گوش را آنْ نورْ نیست
Recite

Every person can be cognized according to their speech since all the external deeds and motions of a person are the results of the varying internal states of Nafs (Self). Rumi believes that a person’s speech and deeds are indeed eyewitness to the nature of his soul and that we can uncover what is hidden within the speaker though listening to his speech. This is one of the key psychological aspects of  Rumi’s Masnavi which has been mentioned in more than one occasion.

There has to be a ‘relationship’ between a Mudrik (Understander) and what he understands.

Dara
The above statement in the language of Whitehead’s is phrased as follows: “There has to be a vectorial link between a subject prehending (Mudrik or Prehender) and an entity (data)”. This vectorial link is termed “Prehension“.

The five senses also do prehend e.g. teh ear prehends sound and the eye prehends shapes and colors and the tongue prehends tastes. Similarly the spiritual affairs are prehended by the spiritual Mudrik (Prehender, subject of a prehension) e.g. the mind’s prehension of imaginary immaterial entities.

That is how the inner secrets of a person can (indirectly) be prehended via his speech and actions, since the five senses have no prehension of what is within a person.

Soul here means the human soul which is a Jauhar (Intrinsic Essence) denudated from all else (specially the body), yet the body is under the Soul’s complete control wherein the soul is the Mudrik (Prehender) for all pleasures. The body is a machine whose operator/driver are the soul’s wishes; whatever is done by the body is in reality the effect of the soul upon it therefore we might say: The Soul prehends (Idrak) the body and the body has some understanding of the soul and neither is veiled from the other.

Returning to the first verse of this write-up which speaks of the moan of sorrowful songs, we see that Rumi is saying that on the surface of things these are moans but in reality these moans are sounded by the influence of no other than his soul. Therefore the ‘secret’ of the verse is his soul while the moans are his body. He observes that not every eye is capable of linking his moans to his soul i.e. the soul is the mover of the body and body is the Muzhir (Place for the manifestation of something) for his soul.

This tune of the Nay (Reed-flute) is by no wind, just by fire
And whoever has no such fire, then cease and be gone!
v. 9
آتش است این بانگِ نایُ وُ نیست باد      هر که این آتش ندارد نیست باد
Recite

Bād: The breath that is blown into the flute, the wind.
Nist: Negation in the first verse and non-being (ceasing) in the second wind.

The tune of the Nay (Reed-flute) is the fire for it flares off the ‘Ishq (Unrestrained Love) and sets the listener afire. This could also refer to the Sama’ (The Sufi Dance) which was used to cleanse the souls  from all pollutants and opacities. Just like the fire which burns and cleans what it comes close to, this Sufi fire burns the desires and whims within the Sufi dancer, a charring which prepares the heart for the reception of the unseen Warid (Divine inspiration entering the heart) and the rays of the Haqiqat (Absolute Truth and Reality). This is because from the point of view of the Sufi the heart without Ishq (Unrestrained Love) and the soul without Mahab-bat (Divine Love) is nothing but an inanimate object, and the person who has no Dhauq (Taste of spiritual experiences) is no different from the beasts and livestock. Such a person might as well be dead and gone, as was versed in the second verse .

Some of the ancient sages, as well as some Sufis, believed that Ishq (Unrestrained Love) is what is running like a current within all creatures and that since there is no creature that does not seek its own perfection and completeness, the unary mover of all such motions towards Kamal (Perfection) is love or Ishq!

Ibn Sina has explicated this in great details as an answer to Abu Addullah Faqih Ma’soumi (Murdered by the command of Mahmoud Ghaznawi in the city of Ray (close the Tehran) at 420 HQ) in the treatise title Ishq (Risala Fi Al-Ishq). Sadred-Din Shirazi has also summarized Ibn Sina’s explanation in his book Al-Asfar Al-Arba’a under the title ‘Ishq-Hayula. (Dara: Hayula is the universal substance which all other entities are built from)

Dara
Wine in Sufi literature means Divine Knowledge (gnosis) or deep love of something absorbed within the heart. This code-word was not first coined by the Sufis, it is found in the verse of the Qur’an: “And their hearts drank the wine (of love) of the calf ” [Qur’an: 2:93], referring to the Hebrews worshipping the calf  in the absence of Moses. In the language of the Arabs, “wine” is used to refer to knowledge and understanding which deeply ooze into the human being like a cloth dipped into a dye, absorbing the colorants. In this case, it has nothing to do with alcoholic beverages and is not an invention of alcoholic sufi-likes. This Rahi (Author) suggests to the Western Murids (Seekers of the Divine) not to accept the substance abuse suggestion of the alcoholic few that roam around and claim to be Sufi Sheikhs.

Harif: Coworker; metaphorically used for a companion or a friend.

Pardeh: Like the seven notes of Western music; however it also could mean a limited set of standard rhymes/notes.

Pardeh Daridan: To tear up the veils metaphorically means: the secrets of someone, hijab in Arabic.

A Nay (Reed-flute) that was chopped off the marsh-reed and carried far away from the other reeds is the metaphor for a lover that is without his beloved who is very far and out of reach; the tunes of this Nay (Reed-flute) soothe the heart of such a lover who is suffering from loss. When these tunes excite such an audience of lovers, a myriad of different states appear within the hearts of the lovers, plain and manifest, as though the veils were tore off their hearts which are thus exposed. The Nay (Reed-flute) exposes the private/concealed sorrows of those lovers.

Note: The Rahi (Author) read the Kay as Keh in order to fit the rhyme of the verses.

Teryāq: A composite antidote to treat venomous bites. From the original Greek,  it has entered Farsi as Tariāk referring to an organic extract or to a mineral.

Damsāz: The soulmate who offers companionship and solace to a friend.

Mushtāq: In Arabic it is an Ism-Fa’il (A doer-name) i.e. yearner in tumultuous excitement within yearning to see the lost beloved.

As was explained earlier, the tunes of the Nay (Reed-flute) either raise the flames of sorrow within the hearts of the lovers or offer soothing relief. Sufis believe that if Sama’ (The Sufi Dance) is performed as a part of desires and lusts ( like a regular dance in a night club), it causes much harm and is nothing but a poison. When properly performed, it is like an antidote for the ailing hearts suffering from the venomous bites of loss of a dear beloved.

The home of the Nay are the lips, where the moans are made…

Rāh-eh Por Khoun: The bloodied path refers to the path of Ishq (Unrestrained Love) where unnumbered lovers are slaughtered and left to bleed:

Do not ask me about the secrets within that house;
Other than blood upon the door and doorway see and question not!
Sindbad Nameh, Istanbul p. 190

Mahram: The person allowed to see or accompany a family member according to Shar’ e.g. the father or brother of a Muslim woman, while all other men are forbidden from her direct visit..

Housh: Rapid Idrak (Prehension), the power that makes something Mudrik (Subject of a prehension). This Rahi (Author) translated this word into consciousness for now.

Bi-Housh: Someone whose consciousness is ailing or suffering from the drunkenness, unable to act consciously with intelligence and deliberation. This refers to someone who has given up the benefits of the life of this world and who is considered gullible or stupid by common people:

“The majority of the people of the Paradise are Al-Bulh” said the Prophet, peace be upon him. Al-Bulh is the plural of Ablah and this is the person who is completely neglectful of evil (i.e. does no evil) and his/her nature is inclined towards goodness. Or someone who is conquered by a salubrious bosom i.e. always suspects the good in people, totally neglecting this world.

This word refers to the situation wherein unless a lover has given up his own Self and its interests, in no way can he comprehend the moans of the Nay (Reed-flute).

In the second verse the border-guard is of the Pir (Wise Sage) of the Persian Sufis or the Sufi Sheikh, to whom the people go to listen to wise advice and admonishment.