This writeup below was written, in part, to deal with the Nur concepts you had brought up. The general academia in the West believes that physical light is all well known to the physicists, and it is actually not true. They know some properties of light under very constraint laboratory conditions, much is unknown.

The original problem with the theories about radiation and absorption, is still unresolved. See Feynman’s and Tetrode below.

Basically the emitter of the light knows information from future about the absorber’s receptivity and availability. This is not discussed or known by the current college retail understanding of properties of light and emission and absorption of light.

I then added an image for three entangled rings, to give the new readers/researchers of Sufism to develop a new language to describe Nur. The idea is that remote or near, likely or unlikely, entities could be in full entanglement with each other though free of any actual linkage as in things being in physical touch with each other.

And the concept of physical light, emitter and absorber and machines that emit or absorb lights, could be used to describe the Nur or Allah’s light, per Qur’an well-known verse using a radiating lamp/lantern as an emitter as an optical machine with glass and a lensing alcove and organic fuel, known to the readers. And that is not far from spirituality of our religion and Sufism.

Problem is our useless college education and retail understanding of the Western sciences as absolute truth.

Tetrode
“The sun would not radiate if it were alone in space and no other bodies could absorb its radiation.”
Source: H. Tetrode, Zeits, f. Physik 10, 317 (1922)

Wheeler, Feynman
“Tetrode’s idea that the absorber may be an essential element in the mechanism or radiation has been neglected perhaps partly because it appears to conflict with customary notions of causality”
Source: Wheeler, Feynman, “Interaction with the Absorber as the Mechanism of Radiation”, Reviews of Modern Physics, Vol.27 Number 2 and 3, April-July 1945

Tetrode
“If for example I observed through my telescope yesterday evening that star which let us say is 100 lights years away, then not only did I know that the light which it allowed to reach my eyes was emitted 100 years ago, but also the star or individual atoms of it knew already 100 years ago that ‘I’, who then did not even exit, would view it yesterday evening at such and such time…”
Source: H. Tetrode, Zeits, f. Physik 10, 317 (1922) 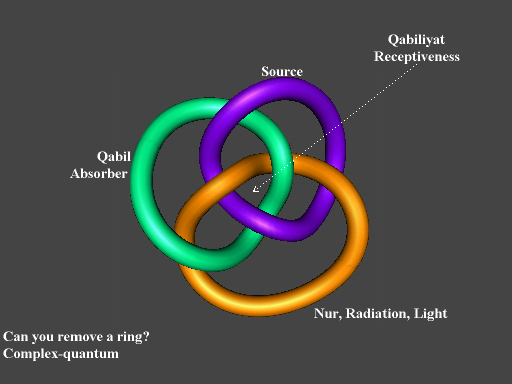 Thus radiation is not quite an elementary process but rather a consequence of the interaction between a source and absorber.

In more technical term: Qabliyat is a complex-quantum, an entanglement comprised of Nur (Light), Qabil (Absorber) and a source.

By complex-quantum we mean an entity with sub-parts that upon any alteration to its sub-parts or even looking at them the entire entity ceases to be irreversibly.

In the context of this verse Qabil is the acceptor who is receptive to the repentance emanated from the seeker and seeker being the source of a radiation and absorbed by the Qabil (Allah)!

What Tetrode, Wheeler and Feynman thought about was not just a part of the physics of radiation; they stumbled upon a spiritual entity closely mimicked by the electromagnetic radiation and absorption.

Let’s say the latter in a different way: There is a complex-quantum in Malakut (Realm of Spirits) which has a similar counterpart (as a reflection or projection) within the Mulk (Realm of Corporeality) i.e. there is no radiation source unless there is an absorber!

And this claim of Tetrode can be interpreted from the language of the Qur’an:

[24:35] Allah is the Nur (Light) of the Heavens and the earth: Heavens and earth are the absorbers that are imminently placed on the path the Nur. And the rest of verse talking about the alcove and the lantern is again pushing for the idea that if there is a source of radiation there has to be an absorber for it e.g. the Mishkat (Alcove, Niche).

39:69 And the Earth will shine with the Nur (Light) of her Lord: Again the earth is the absorber that is placed against the illumination of the Nur (Divine Light).

Violation of Causality
As we saw in the above research that for an accelerating charge there are two waves:

The Sufis have long claimed that when a Murid (Seeker) recites a Dhikr (Remembrance) e.g. Al-Hamdu (All Perpetual Praise) for Allah, It was all along Allah who remembered ITself and then the person was made to remember Allah i.e. the will to remember Allah in a person traveled backwards from the future to the present, hit the person, and then another wave (remembering Allah) traveled forward in time towards Allah. Or as Tetrode imagined about the far away star: Allah remembered ITself and adored ITself in infinitely past Qidam (Space of all actualities) and knew about the person tonight making Dhikr (Remembrance) i.e. (that knowledge became) a Nur (Light) shone from the infinitely past and altered the future i.e. the person was made to remember Allah.

Ist’idad
Isti’dad is the measure of the receptivity/absorption of the Qabil (Receptor) i.e. the absorption rate of the accepting what is emanated from the source. It can be translated into English as ‘measure of preparedness to accept’ or ‘Aptitude to accept’ but we see the Whiteheadian term ‘Appetition’ more befitting i.e. ‘measure of appetite for consuming/absorbing the incoming’.

Ka (‘you’) The Ain (Source Spring, Essence) of all Causality

Sharh-eh Sathiyat by Baqli
Chapter 464
Shat-h of Husari
“Husari within the state of Shat-h said: Adam (The primordial man) was the place/space for all causality! By means of him (as an instrument) all causality is accessed! As was said: Indeed for you there (Paradise) might not be any hunger or nakedness [20:118]. Otherwise in presence of Allah how could there be any trace of hunger and thirst?”

In other words Adam was such a terrific force of causality that indeed it required an edict from Allah to prevent his own causality to harm him!

Note: The verse does not say La-Kum (For ‘you’ plural) it says La-Ka (for ‘you’ singular male gender). So the source or the portal for all causality was Ka (‘you’ male single).

Let’s extend the above concept: You-ness to I-ness of human being is the place/portal where all the causality of the cosmos generated and passed through. Let’s examine this claim with what Tetrode said earlier:

Tetrode
“If for example I observed through my telescope yesterday evening that star which let us say is 100 lights years away, then not only did I know that the light which it allowed to reach my eyes was emitted 100 years ago, but also the star or individual atoms of it knew already 100 years ago that ‘I’, who then did not even exit, would view it yesterday evening at such and such time…”
Source: H. Tetrode, Zeits, f. Physik 10, 317 (1922)

What makes the Tetrode’s concept work and at that in such a unique way is not the radiation itself but the I-ness of the observer in this universe. If this I-ness is removed the universe will be stripped of its causality i.e. immediately destroyed.