There are several issues with the lection of the Surah 113 named Al-Falaq:

1. The Prophet peace be upon him recommended to read this Surah over and over, as he did himself seeking sanctuary of Allah. However within the Surah there is the ‘convenient’ translation of Naffāthāt Fi Al-‘Uqad namely: Seeking refuge from the magicians blowing into knots (then un-knotted without touching). This poses an issue with the Prophet using this Surah as off-repeated prayer, since in most of such recommendations the prayers are most general, regardless of the circumstances or context, and never such specific mention of the events in the daily life of the Prophet had been used as a part of a prayer.

2. The mention of darkness of night in this Surah being evil, is not in congruence with the rest of mention of night in Qur’an which has been rendered as a time of tranquility and worship and spiritual events!

3. The ending verse, seeking refuge from the evil of the envier, does not match any of the previous verses and it is completely isolated. Question could be asked: Why envy? why not anger?

Perchance we all have been reading this amazing Surah the wrong way all our lives!

The only satisfactory Tafsir (Exegesis) for this Surah has been found to be that of Ibn Sina. Sadly both Arabic and Farsi texts are quite hard to come by, but this Rahi (Author) was fortunate to be given both copies for studying. The only Arabic copy found on internet was preserved by Joseph Kenny, O.P. .

Ibn Sina
Say I seek sanctuary with the Rabb (Governor, Administrator) of the Al-Falaq: The Sunderer (Faliq) of the darkness of ‘Adam (Non-Being) by means of the light (Nur) of Al-Wujud (Allah’s Being-ness).

Remark 1. Realm A: Azal (Sempiternity) where there is Allah and no one else, where there is Light and no concept of darkness. Realm B: ‘Adam (Non-Being) the universe where there is no light at all! The rules in either realm totally dissimilar to the other.

Remark 2. In between the two disjoint realms there is a Singularity called Al-Falaq or the Dawn. The Lord of this singularity is Allah. Allah allows the passage from one realm to the other, through the singularity of Al-Falaq, otherwise the two realms are inexorably partitioned.

Remark 3. Allah as Al-Fāliq (Sunderer) breaks the said singularity, Light floods emanates from Realm A: Azal (Sempiternity) into darkness of Realm B: ‘Adam (Non-Being), suddenly there is a medley of light and darkness which we feel we observe we think of as this extant cosmos. In Realm A there is Allah and no one else, in Realm B there is Allah and other than Allah.

Ibn Sina
And the very first creature emanated from it (through the singularity from Azal to ‘Adam) is ITs/His Qadha’ ( Primordial Decision, Decree)

Remark 4. IT allowed to be known by other than ITself! This was a primordial decision amongst infinitely other decisions. 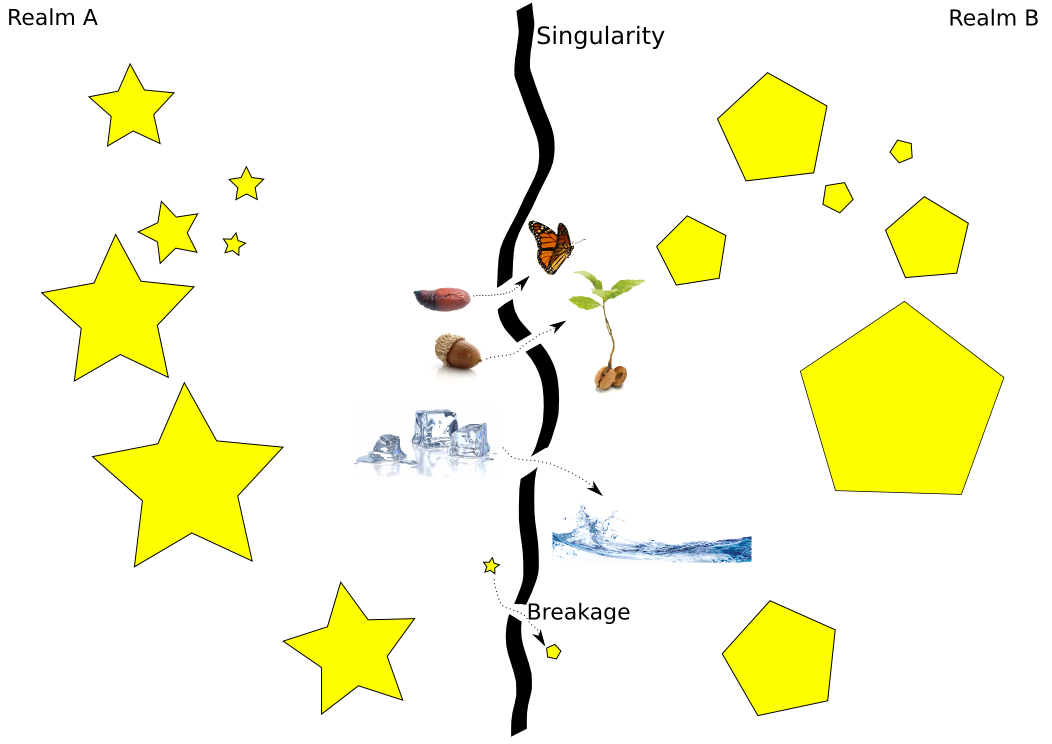 Ibn Sina
The original (emanation) had no evil within, but evil found concealed under the radiance of the primordial Light (Nur)!

Ibn Sina
(This evil caused by an occlusion of Light (Nur)) due to the opacity necessary for Mahiya (What-ness), originated from Huwiya (Who-ness).

Remark 5. opacity necessary for Mahiya (What-ness): The primordial Light (Nur) is Singleton, in order for it to bring to existence something other than ITself, it needs an opacity or something that causes shadow to be discernible, that shadow-caster is Mahiya (What-ness) that allows for something other than Allah to become patent, and the origin of this shadow-caster What-ness was Huwiya (Who-ness) the Divine Pronoun/Name/Attribute which allows for pointing i.e. “That over there!”, indicating the direction of something discernible. In summary What-ness is an opacity originated from Who-ness occluding the light, thus a dark shadow the source of all evil, the source of all existence as well.

Ibn Sina
The penetration of ITs Qadha’ ( Primordial Decision, Decree) is the primordial cause for ITs ’cause and effects’ which are ITs Al-Qadar (Immutable Destiny, Fate) and ITs creation. For that matter Allah said: ‘From the evil of what (IT) created’, the evil which is set from the creation and fate (Qadar), since this evil does not originate except from bodies created and caused from/by fate (Qadar).

Ibn Sina
Also the bodies (matter) are from ITs Al-Qadar (Immutable Destiny, Fate) and not from Qadha’ ( Primordial Decision, Decree), and Fate is the source for for all evil since bodies (matter) could not be found except here (in Fate), for that reason annexed the evil to ‘what was created’.

Ibn Sina then continues with the two major categories of evil, the two major sources of darkness(s) and occlusions for Nur (Light) :

Remark 6. Why Ghasiq, from Ghasaqa, used to describe the darkness? Why not Zalama? Given the known context of the verb Ghasaqa, it is clear there was light e.g. sun and then it set and then darkness entered to every possible location (cavity) or Waqaba. Similarly, there was Nur (Light) it was occluded by the above said opacity of the creation and then darkness enters into everything. Translation: And from the evil of the darkness once entered (into everything created).

Ibn Sina
The Animal Force (Animal Self) is darkness which is Ghasiq (sets after light) and opaque (severely occludes light).

Ibn Sina
… and others such as lusts and anger, in general things that happen to something from outside, therefore this form of darkness (Animal Self) is renewable.

Anger and lust within an entity are impacts of another entity outside the capsule of Animal Self, therefore each time they occur is a de novo darkness.

Terminology:
Naffāthāt: derived from Nafatha flowing of breath with tiny spit out of the mouth, or blood from wound, or poison from the bite of a serpent.

Prophet mentions the Arch Angel doing Nafath into his Self or Mind (Rau’) while saying: No person/Self dies until all her provision is fulfilled (given), so safeguard against Allah‘s (anguish) and be frugal in seeking (daily provision).

Remark 7. From this Hadith (Narration) one could extrapolate relationship between Nafath and provisions, so the angel blows with a tad bit of spit (liquid) into the mind or Self of the Prophet and that symbolizes giving of the provision, peace be upon both of them.

‘Uqad: plural of ‘Aqd, knot knit joint fastened locked together, in the case of this Tafsir (Exegesis) Ibn Sina considers this word to mean the organs and limbs and body parts tied together into a full body of a composite living creature. You might add on the modern thought of multi-cellular multiplex of cells.

Remark 8. From these two concepts Ibn Sina cognizes the Botanical Self (Nafs Nabati), the multi-cellular multiplex of organs and limbs and physiology and psychology that is suited for growth and expansion in multiple dimensions fueled nourished by devouring of provisions.

Ibn Sina
Naffāthāt Fil Al-‘Uqad is an Ishara (Pointing) towards the Botanical Force (Botanical Self), a force that grows the body and expands it.

Ibn Sina
The Botanical Force (Botanical Self) was linked in similarity to Nafath (Blow of breath with tiny spit), since the blow of breath into something expands it in all directions i.e. growth.

Remark 9. These two forces, Animal Self united with Botanical Self shape the life and the cosmos for all to continue to survive. Both forces or Selves incubate much of the evil, not as a part of their design, but as a side-effect or after-effect of creation and engineering of ‘becoming’ and ‘living’.

Remark 10. And from the evil of envier once envied: the Botanical Self is in constant need of devouring provision to grow and maintain while the Animal Self is in constant motion and desiring and chasing after provisions, in ceaseless conflict internally with the Rational Self (Nafs Natiqa) and externally in competition with other creatures who might provide challenge for the needed acquisitions required by either Botanical or Animal Selves to be fed or sated. These experiences are felt as envy, to wish what others have, wish them to lose what they have, and wish to gain all that they have for one’s own provision.